The finalists of the second day have been already known

All heats passed. Athletes and fans are looking forward to the semi-finals and finals of the Championships. Those who will fight for the medals have been defined during the second day of the competitions.

Athletes from 9 countries (Hungary, the Ukraine, Belarus, China, the Republic of South Africa, Romania, Russia, Denmark, Spain) will fight for the medals at K1 Junior 500 m.

The athletes, who competed at a 500 m canoeing distance, from Germany, Mexico, Georgia, Thailand, Uzbekistan, Kazakhstan became the leaders.

The athletes from Hungary, Spain, Croatia, Belgium, Belarus, Sweden, Germany, Romania, Russia showed the best results at a 500 m kayaking distance and became the finalists of the Championships. Belarusian  Aliaksandra Gryshyna is satisfied with her successful finish, but she isn’t glad of her start:

I almost flopped over the boat at the start because of my excitement, and I should catch my opponents up. The last part of the distance where I was competing with the Bulgarian athletes was very stressful. I hope to fight for the prize in the finals. But let’s not run ahead. The main fact is that I’m still able to copmpete in the finals.

Athletes from 6 countries (Uzbekistan, the Ukraine, Kazakhstan, Poland, Germany and Ecuador) gained the tickets to the finals at C1 U23 500 m.

The athletes from Poland, Spain and Uzbekistan will compete in the finals at the distance of C4 Junior Men 500 m.

Belarus, Canada and Australia will be represented by their athletes in K4 U23 1000 m.

Juniors from Denmark, Germany, Belarus, Great Britain, Spain and China will participate in the finals in kayak double at the distance of 500 m. At the same distance the athletes under 23 from Romania, New Zealand, Canada, Russia, Poland and Belarus also came to the finals.

Belarusian Anastassiya Babok competing with Katya Aleksievich confidently declared:
— We are our main opponents. The most important is to set for the race – and the final is ours. It is unnecessary to analyze the performances of the opponents. In general the Championships level is very high. It's the Olympic year now, so hose who were not qualified for the Olympic Games participate in this competitions.

The Belarusian team is considered one of the favorites of this Championships. The coach of the hosting country Sergey Korneevets told about the current achievements of his pupils:

—The final start on the 30th of July and the struggle for top places. The victories of our team leaders are the reason of such state of things. Alena Nazdrova ana Nadzeya Macharchanka begins the fight for the gold in C2 Jun Women. Later Juniors in kayak double Lizaveta Anoshka, Nastassia Laurenava, Hanna Machulskaya and Karyna Bandarenka will join this battle. 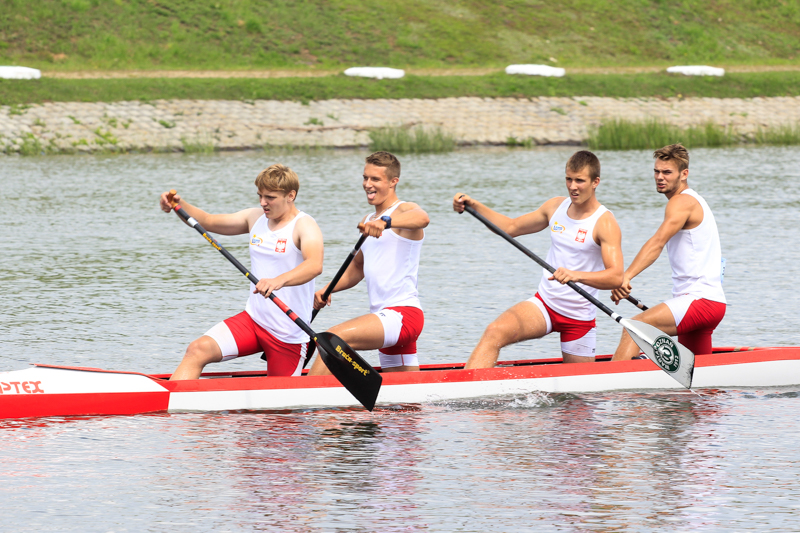 K1 Jun Men 100 m is the following category where Belarusian athletes will participate. Maksim Klok will fight for 4-6 places. Our athletes compete in the rest categories: kayak forth and canoe double under 23 at the distance of 500 meters, junior kayak double and canoe double at the distance of 1000 m. K2 Men will be the last final for Belarusians where our athletes fight for the highest place on the final B.