Minsk Is The Capital Of Belarus

Minsk is the capital of Belarus. It is the largest transport hub, political, economic, cultural and scientific centre. The headquarters of Commonwealth of Independent States is also located in Minsk. Minsk is the ninth largest populated city in Europe and the third in the EEU. The city is situated not far from the geographical center of the country and stands on the Svisloch River. Minsk area is about 348.85 km², its population is 1,959 people.

The climate is moderately continental with the significant influence of Atlantic sea air. The summer is usually warm but not hot. The winter is mild with frequent thaws.

Minsk is the largest economic centre of Belarus. The city produces 18,8% of industrial products of the whole country. Minsk is the location of the following largest assembling plants: Minsk Tractor Works MTZ, which is the manufacturer of wheeled tractors holding about 8-10% of the global market; Minsk Automobile Plant MAZ and Minsk Wheel Tractor Plant (TM VOLAT); Minsk Engine Factory MMZ; three Machine -Tool Plants (the one named after S.M.Kirov, the other one named after October Revolution and Minsk Automatic Lines Plant named after P.M.Masherov) and also Amkodor Plant - manufacturer of road construction and other specialized machinery and equipment.

The city has also a number of enterprises for the producing of components (the engine, spring and gear-wheel plants, etc.), the carriage-repair plant, the motorcycle and bicycle plant, the Luch watch factory, Belarusian Optical & Mechanical Association (BelOMO), the 407-th Aircraft Repair Plant and others. The electronics industry of the country also possesses the significant development. It is represented by such manufacturers as Minsk Electronics Enterprise Integral, Minsk-based TV-sets, DVD-sets and Household Appliances Horisont Plant, Minsk Refrigerators and Household Appliances Atlant Plant, the Belarusian manufacturer of household appliances the Radio-Electronic Plant (BelVAR), the electromechanical and electrotechnical factories. 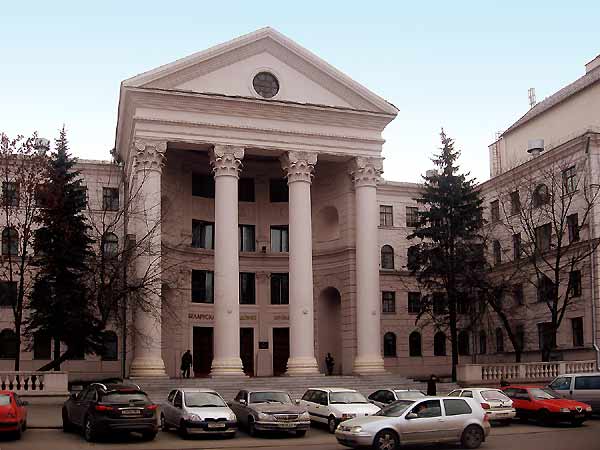 Formerly this suburb was the largest one in Minsk. Despite the fact that it was separated by the river from the old part of the city, the existence of several bridges allowed in ancient times to begin development of the area. There are several hypotheses about the origin of the name "Trinity Hill". According to the most likely hypothesis it is derived from the name of ancient Catholic Church in Minsk established by Grand Duke of Lithuania and the King of Poland Jogaila. Also it is believed that the name came from the Church of Holy Trinity or the Holy Trinity Nunnery. Written sources of XVI-XVII centuries indicate the presence here of the city centre in XIV-XV centuries. However, after Minsk received the Magdeburg Right in 1499 and the construction of the town hall in the High City. However, after receiving the Minsk Magdeburg Right in 1499 and after construction of the town hall in the High town, Traetskaye Suburb gradually lost its central status XVI century was built up with wooden houses.

In XVI - XVII centuries that place was one of two pottery centers in Minsk for tile production. Tile shards, fragments of dies - molds for pressing the pattern was found here. The suburb was inhabited by people of the middle class - craftsmen, traders, farmers, military. The famous Belarusian poet Maxim Bogdanovich was born in Traetskaye Suburb, some period of time the family of the poet Yanka Kupala, who made a great contribution to the development of Belarusian literature, lived here. Since the late 17th century till 1935 on the hill Trinity market was located – the largest shopping area of the city (on the site of the park and the Opera Theatre). Ancient layout of suburbs remained unchanged until the beginning of the XIX century, when during the great fire in 1809 burned almost the entire construction of the Trinity Hill, especially in its central and northern parts. In the following years, the plan of reconstruction of the buildings of the Trinity Hill had been developed. By this time there was a fundamentally new design of planning of all the left-bank part of Minsk, which in general has come to the present day.

At the end of XIX – beginning of XX centuries, this area stood apart with motley caste composition of the population (peasants, workers, traders, officials of lower ranks, small landowners) and quite a contrast appearance. In 1930-1960s some of the facilities in the suburbs were destroyed. Houses and inner yards evoke the atmosphere of the first half of the XIX century, however, many of the buildings have basements and first floors, referring to an earlier time. There were trade and handicraft facilities sometime on the ground floors of these buildings.

A small humpbacked bridge, thrown across the Svisloch, leads to an artificial island - the memorial complex "To sons of the Fatherland, who died outside it". In Syria, Angola, Mozambique, Nicaragua, Ethiopia, Somalia, Cuba 789 soldiers and officers from Belarus were lost. But Minsk people perceive a memorial as a monument to the victims of the Afghan war and call it "Island of Tears".

32 thousand natives of Belarus were serving in Afghanistan as part of a "limited contingent". 771 Belarusian soldiers died in Afghanistan.12 soldiers went for a burton. About 2,000 former "Afghans" died of wounds and diseases after they returned home, many of them committed suicide. 785 Belarusians became disabled after severe injuries and contusions. Untimely the parents die of grief for their dead sons. "Island of Tears" was created by a group of Ukrainian sculptors and architects under the direction of Yuri Pavlov and was unveiled on the 3rd of August 1996.


The memorial is unusually flexible, full of artistic ideas and symbols. There is a church-monument in the centre of the memorial. The first memorial on the island - a boulder with a bronze icon of the Mother of God - was established here in 1988 as a foundation stone. The monument to lost soldiers is made in the form of the temple. It stands on 16 stilts, stretching out into the marshy soil and reinforced with boulders. The form of the temple, established by Euphrosyne of Polotsk, was laid in the basis of this monument.. Someone images the temple like a bell, someone – as an overturned flower with four petals. The eyes of mourning women, shedding tears over their sons, husbands, grandchildren, brothers, sweethearts, face to four corners of the earth. Behind each of the four sculptures inside the temple there are four altars carved with the names of Belarusian soldiers who died in the "hot spots" of our planet. All the icons and interior painting are made of ancient encaustic technique - wax painting. This painting carried with hot-melted paints, the binder of which is bleached beeswax. In the centre of the temple, in the wellhole, there is a holy place, where mothers of died soldiers laid the soil that they brought from the graves of their sons. The taught strings of metal, covered with copper and attached to the five bells, go to the wellhole. The strings are buzzing when wind blast are string. And in the days of remembrance the bell ringing is heard. 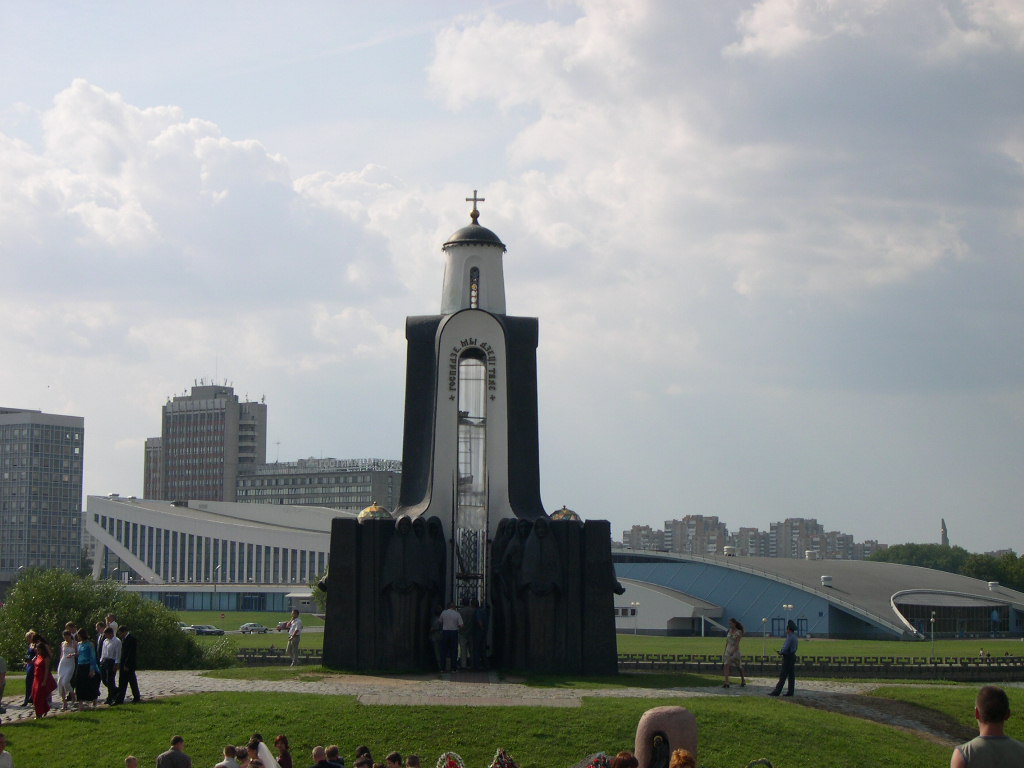 The most distinctive element of the memorial - a sculpture of a crying angel. The angel is crying because he was unable to fulfill its mission – to protect the soldiers from their death. At the water's edge there are boulders with names of Afghan provinces, where Soviet troops fought. Stela with camouflage mosaic floors represents Table of Memory.

The history of the theater begins in the 20-ies on the stage of the first State Drama Theatre, who had in his composition of the opera soloists, choir and ballet group and a small symphony orchestra. There musical and drama performances, parts of operas and ballets were staged, folk music was played. During this period the future stars of the Belarusian opera and ballet were educated in music colleges in Minsk, Vitebsk, Gomel and also in created in 1930 State Opera and Ballet Studio, headed by outstanding Russian singer Anton Bonachichem - formerly a colleague of great Feodor Chaliapin at the Mariinsky Theatre in St. Petersburg.

One of its main tasks of Opera and Ballet Theatre of Belarus considered the establishment of a national repertoire. On March 10, 1939 premiere of the Belarusian composer Eugeny Tikotsky "Mіhas Padgorny" marked the opening of their own theater building on Trinity Hill, built by the famous architect Joseph Langbard. The first ballet performance, presented in a new stage under direction of the famous choreographer Kasyan Goleizovsky, was "The Fountain of Bakhchisaray" of M.Asafev that opened the new 1939-1940 season.

During the Great Patriotic War (1941-1945) Belarus was occupied by Nazi troops, the capital was subjected to the most severe bombardments and was turned into ruins. Many actors of the theater went to the front or have joined the partisan movement, lots of them created front concert brigade and performed at the forefront for the soldiers of the Soviet Army. Opera and Ballet Theatre was evacuated to the Russian Volga region (to the cities Gorky and Kovrov), where it continued his active creative work.

Immediately after the liberation of the capital the staff returned to Minsk and in December 1944 opened the season with premiere of the opera "Alesya" of E.Tikotsky. This event marked the revival of the National Opera and Ballet Theatre of Belarus. After the repair and reconstruction of damaged by bombs building of the theater, its work was resumed, and soon the theater became one of the recognized leaders in the cultural space of the former Soviet Union. In the following years, until the collapse of the Soviet Union, the Belarusian theatre had steady reputation as one of the brightest and most creative staffs. In 1996, as a result of the reorganization, the theater was divided into independent structures - the Opera Theatre and Ballet Theatre. In 2008, it was decided to re-unite troupe in a single National Academic Bolshoi Opera and Ballet Theatre of the Republic of Belarus.

On the 8th of March 2009 the President of the Republic of Belarus Alexander Lukashenko took part in the opening ceremony of the theatre after reconstruction.

At present time new opera and ballet performances are prepared in the renovated theatre building.

On the 12th of May 2010 Metropolian of Minsk and Slutsk, Patriarchal Exarch of all Belarus Philaret blessed the National Academic Bolshoi Opera and Ballet Theatre of the Republic of Belarus.

In recent years, the theatre staff visited more than 30 world countries. There will be probably few countries on the cap where at least once the National Academic Bolshoi Opera and Ballet Theatre of the Republic of Belarus hasn’t performed: from Portugal and Spain to Japan and China, from Norway and Great Britain to Turkey and Thailand – everywhere the theatre staff found its devotees.